Quality control in surface disinfection has always been a challenge. Jim Mann, a Brevis associate, sent us a nifty device to check for surface cleaning. It is called MarX and Brevis is now marketing it as the GlitterBug MarX.This is a stamp device that leaves an invisible circle X mark on stamped surfaces that can be visualized with UV light. It will be simple for quality control personnel to check whether surfaces have been cleaned by shining a UV source, such as the very popular GlitterBug GlowBar LED, on stamped surfaces. In this SARS-CoV-2 pandemic world, knowing that surfaces have been cleaned is more important than ever. And will be in the future when the next pandemic after Covid 19 rears its ugly head, as surely it will.

For decades Brevis has been a world leader in the teaching of hand hygiene with its GlitterBug UV product line and instructional videos. The GlitterBug MarX product is a great addition to this popular family. The MarX device is very portable – and pocketable – at about 1.0 by 2.5 inches (2.5 x 6.3 cm). It is probably capable of at least a thousand stampings if kept covered between uses.

Surface cleaning matters even more than ever. Use the MarX to mark surfaces with an invisible mark then use the SpotShooter8 Lamp to see if those marks were properly cleaned off. Easy method to Trust but Verify.

If only the Marx Brothers (Groucho, Harpo, Chico and Zeppo) had known about this, vaudeville may have taken a different turn back in the early 1900s. There is a story, which I can’t verify, that explains why Harpo never talks. Seems that the brothers were on tour and in one particular town, their act was not well received. So as they were walking out of town to get to the train station, Harpo turned around and said something like, “I hope your town burns down.” The next day when they looked at the newspaper, what do they see but an item about how that town had been mostly destroyed by a large fire. Of course, they had nothing to do with starting the fire, but Harpo’s curse was so prescient that the other brothers prevailed on Harpo not to talk any more. And he never did in their acts including when they got into movies. The story may be apocryphal but I like it anyway. If it didn’t happen, it should have.

Meanwhile, GlitterBug MarX has happened and is available now for your consideration and use. Check it out. You will be impressed with its simplicity and effectiveness. 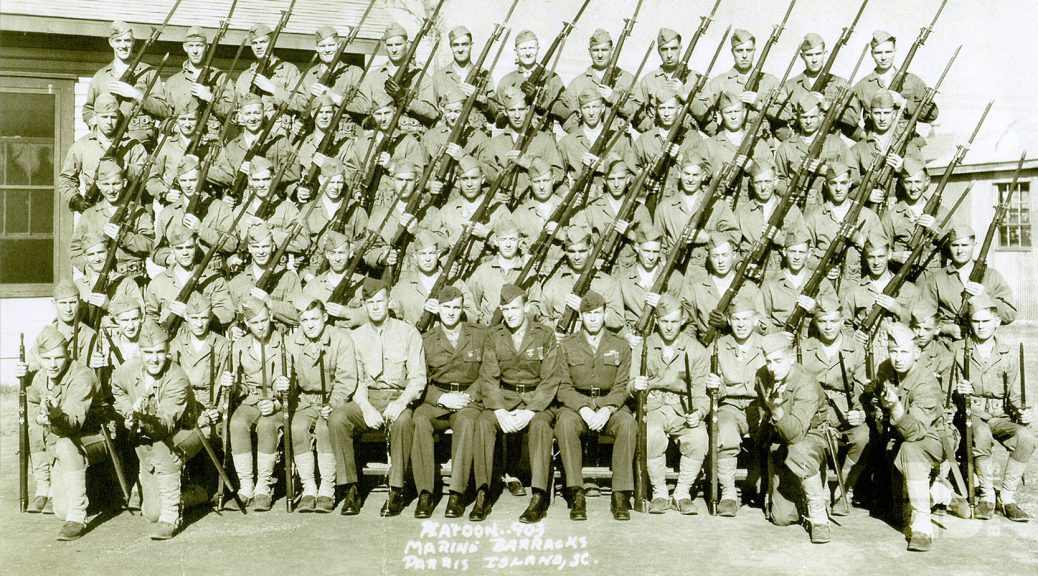 I was born in lower Manhattan (just a few blocks from where the World Trade Center would later be built) in October of 1931. My earliest memories are of growing up in Forest Hills, an upper middle class, pleasant neighborhood on Long Island. Life was simple, enjoyable, worry-free.

My father was an internist with an office on Park Avenue. He had deep patriotic instincts and was inspired to join the Naval Medical Reserve about the time I was born and was commissioned a Lieutenant Commander. Life took a dramatic change on December 7, 1941. In what seemed like a matter of minutes, Dad received orders to report for active duty early January in the Marine boot training camp on Parris Island, SC. Within days he had to get his new uniform from Brooks Brothers, arrange for another doctor to take over his practice, get ready for Christmas for my sibs and me, and get himself out the door and down Highway 17 to South Carolina. Meanwhile Mother had to pack all her dishes, etc. in barrels in the basement, rent the house and get ready to move my sister and brother and me to follow at the semester break the end of January.

What I remember most that a friend drove us to Pennsylvania Station on a miserable evening with freezing rain to give us a cold send-off. My mother and sister slept on the lower bed of a pullman car while my younger brother and I slept on the upper bunk. But in the morning when I looked out the window, we were in Virginia and the sun was shining. Wow! That afternoon the train arrived at the whistle-stop town of Yemassee, SC where Dad was there to meet us in his trusty 1941 black Dodge sedan. He drove us to our new home on the island. It was a single story affair with a screened porch on two sides where I slept in the warmer weather and listened to the buglers around the island play a nameless tune at 9:00 PM and taps at 10:00.

Although I was only 10, I remember how impressed Dad was when he came home and reported that there was a case of spinal meningitis in a recruit. At that time it was not only highly contagious but essentially untreatable and with a very high mortality rate. No antibiotics then. But there was sulfadiazine and this was given prophylactically to everyone(?). Anyway, Dad was mightily impressed with that seeming miracle of stopping a threatened epidemic in its tracks. I’m sure he well remembered the influenza pandemic beginning in September, 1918 that exploded in a similar military camp in Camp Funston, KS, since he graduated from medical school about the same time.

My mother, who was raised in New York City, used to tell about meeting a friend who would say something like, “Did you hear that Bill died last Tuesday.” And Mother would say, “How could that be? I just saw him a week ago and he looked fine.” It is hard for me to imagine what it was like to live when the possibility of a random strike of lightning could hit you with a rapidly fatal illness like influenza. We can be happy that we live in an age where that does not happen in this country while continuing to remind ourselves that the possibility of a new pandemic hangs over our heads like the Sword of Damocles. Carpe diem! Make every day count. 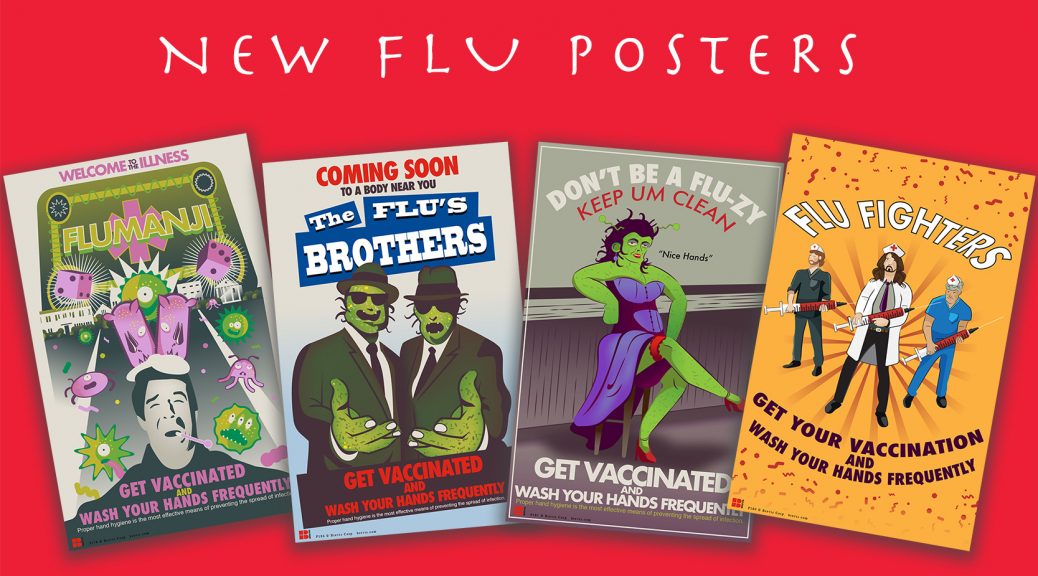 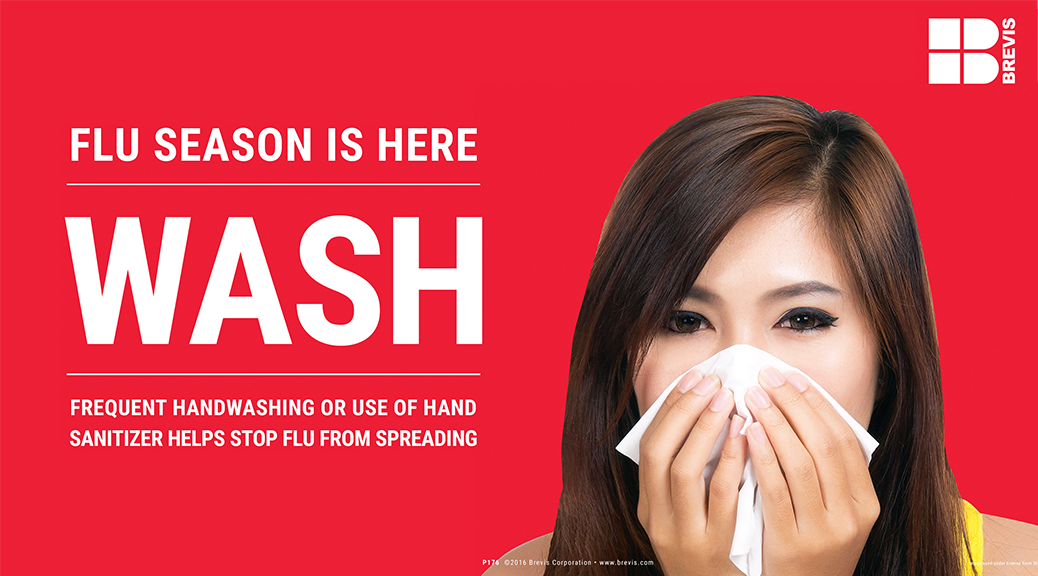 The flu is making headlines again this year. It seems that the flu virus is widespread in at least 46 states already causing tremendous woe and suffering. As always proper hand hygiene and getting vaccinated should top your list of defense strategies. Remind yourself and those around you to wash hands frequently with strategically placed Flu Posters from Brevis.